A recent New York Times series called "Toxic Waters" has rightly drawn attention to the issue of drinking safe – or unsafe, as the case may be – tap water.
The reports reveal that the federal government could do a much better job of regulating the Clean Safe Water Act. Apparently, 40 percent of the U.S. community water systems are in violation, resulting in what appears to be unsafe drinking conditions. About 23 million Americans consume "low-quality" water from the tap.
Florida's dirtiest water: Florida ranks among the top 10 dirtiest states, according to AOLHealth.com. The website reports that approximately 17 million Floridians have been exposed to bad tap water containing more than 100 contaminants. More than 9 million Floridians, for example, may have been in contact with barium runoff from mines. For some perspective, approximately 25,000 of those 9 million people were exposed to amounts of barium considered to be unsafe. Additionally, about 11 million state residents may have drunk water with radium-26, found around natural uranium deposits, with more than 11,000 of those coming into contact with high levels.
California, Wisconsin and Ohio also join the list of states with dirty water. Check out AOL's photo gallery with the 10 worst states.
Unfortunately, we can't simply turn to bottled water, as many manufacturers do not fully report where they obtain the water, nor what is in it.
What do you say? What do you think should be done? Have you had a problem with contaminated tap water?

Originally at www.i-newswire.com/record-sales-for-enagic-kangen/31488
Enagic USA celebrated record sales in March 2010 with earnings of approximately $13 million. The market leader in home water ionizers, Japan-based Enagic has expanded throughout Asia, the United States, Canada, Mexico, the European Union, and Australia. US offices in Los Angeles, New York, Chicago, Honolulu, and Dallas promote Enagic machines and healthy, alkaline Kangen Water®. This year, Enagic is expanding aggressively with a variety of marketing campaigns. The company's most recent promotion, the 1 to 3A Campaign, resulted in over 120 achievers earning special $1,000 reward checks.
Approximately 4,000 Kangen Water® machines are shipped monthly in the United States. The Enagic equipment has been perfected over decades of research by Japanese scientists. Using the highest-quality components, the machines purify water and ionize it, creating healthy Kangen Water® for drinking. The water retains healthy minerals such as calcium while filtering out contaminants, and the alkaline structure makes it rich in antioxidants. Enagic machines are recognized by the Japanese government as medical devices, and used in Japanese hospitals to promote health. Enagic ionizers are also widely used in households around the world, with strong growth in the United States. In addition to drinking water, Enagic ionizers also create other specialized types of water, including acidic water for cleaning that can help eliminate the use of cleaning chemicals. As consumer interest in protecting both the environment and personal health grows, so have sales of Kangen Water®.
The company's Q1 results expanded at an unheard of rate as households across the country learn of the benefits of Kangen Water®, the tremendous potential of the firm's compensation plan, and the peace of mind afforded with the security of the company. Throughout the difficult economic times, Enagic has continued to thrive. After 36 years as the leading manufacturer of healthy ionizers, Enagic predicts strong interest in Kangen Water® will grow throughout 2010 and into the coming decade.
To learn more about Enagic and Kangen Water®, visit the Enagic corporate website at the following link http://www.enagic.com. Also, please stay in touch with Enagic by visiting the official Enagic Facebook fan page at the following link: http://www.facebook.com/pages/Enagic/345176645002 and the official Enagic Twitter account at the following page: http://twitter.com/enagic .
Originally at www.naturalnews.com/021687_pH_balance_alkaline_water.html

Drinking water with higher alkalinity is good for your health, according to Toronto-based Clearlight Holistics, which makes water ionizers and other holistic health products. Research from scientists supports this argument, but there is some dissent regarding the effectiveness of ionizing water, according to the web site Wikipedia.com.

What you need to know - Conventional View
• A water ionizer electrically separates the acidic and alkaline elements of water and then removes the acidic parts from your drinking water.
• Studies have correlated that water ionization used in Asia has increased the lifespan of people in Japan and South Korea.
• Ionized water offers a high level of helpful antioxidants, medical studies have shown.
• There are many manufacturers of water ionizers to give you more healthful water from your tap.
• Ionizing your water can offset the effects of a heavily-acidic diet of processed foods, the company says. These foods have high acidic levels that are neutralized by ionized water.
• Dentists have suggested for years that neutralizing the acidic qualities of saliva can help prevent cavities from forming.
• "A balanced pH will help prevent illness, so it is very important for your level not to be too acidic. Ionized water, since it is very alkaline, dissolves accumulated acid waste and returns the body to a balance. Keeping ourselves alkaline is the first line of defense in fighting any disease," states Matt Condie, a holistic health advocate and owner of Clearlight Holistics, in a press release.

What you need to know - Alternative View
Statements and opinions by Mike Adams
• The diet of most people is too acidic. This leads to a loss of bone mineral density and can even lead to a diagnosis of osteoporosis.
• However, drinking alkaline water can also weaken stomach acid and reduce the absorption of dietary minerals. Alkaline water should never be consumed with mineral supplements or foods requiring strong acidic breakdown (such as raw foods).
• There are many other strategies for alkalizing the body: drinking fresh vegetable juices (from a juicer or blender), eliminating refined sugars from the diet and avoiding coffee and sodas. Soft drinks are highly acidic because they contain phosphoric acid.

Bottom line
• Ionized water is considered by many as good for your health because it neutralizes the acids found in food. 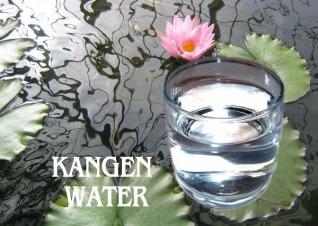 A University of Georgia scientist has found an environmentally friendly product nurserymen can use to kill plant diseases.
What is it?
Water.
But this fungus-killing water doesn't flow from just any faucet. It's electrolyzed water created by a machine that combines water, electricity and a salt solution that enhances the water's properties.
"In a greenhouse operation, you're going to have these two diseases," Buck said. "They're foliar fungi that attack the leaves and flowers of plants."
Buck applied the electrolyzed water as a spray and found it killed fungi much faster than traditional fungicides.
"We're not trying to replace fungicides," he said.
"But we are looking for alternatives and additional tools for growers to use. On top of its effectiveness, the electrolyzed water is also environmentally friendly."
The water kills bacteria and fungi almost immediately.  But it loses its properties over time. "That's another reason it would be a popular choice," he said.
Buck expanded his tests to include 25 fungi. And each time the electrolyzed water killed the fungus in "usually 10 to 30 seconds."
Over the next two years, he plans to broaden his research into electrolyzed water's use as a contact fungicide. He'll do so with the help of a $123,000 Pest Management Alternatives grant from the U.S. Department of Agriculture.
He now plans to find out how much and how often the water should be sprayed, which ornamentals it works best on and how its cost compares to that of traditional fungicides.
Buck's research may lead to EO water replacing or reducing the use of chemical fungicides in commercial greenhouses.
"The electrolyzed oxidizing water unit won't be an affordable option for mom-and-pop nurseries," he said. "But large nursery operators should find the cost well worth the benefit."
For the past four years, CAES food scientists have been using the electrolyzed water to kill bacteria on food and sanitize surfaces and equipment used in food preparation.
"We're focusing on finding safe, effective, economical and practical means of controlling food-borne pathogens as food moves from the farm, through postharvest operations and onto the table at home," said Yen-Con Hung, a CAES food scientist.
"EO water has many applications," he said, "from nonthermal food washing and sanitization to water treatment and general household cleaning applications."
Hung has tested electrolyzed water's effectiveness for controlling food-borne pathogens on plastic kitchen cutting boards, fresh poultry and lettuce.
"This water drastically cuts down the levels of Salmonella and Campylobacter on chicken carcasses," Hung said. "It would be a very effective addition to chicken processing plants."
He has found the water effective, too, at removing pathogens on foods like lettuce that can't be heated to kill bacteria.